In the first half of July, traffic arrangements will change in the areas of Rannamäe tee, Põhja puiestee and Kalasadama street in Põhja-Tallinn, and Toompuiestee in the city centre. 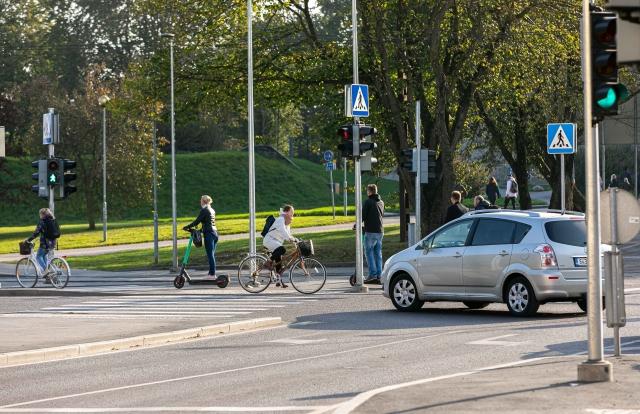 In the area of Rannamäe tee, Põhja puiestee and Kalasadama street, the changes aim to reduce the burden of cars on Kalamaja's narrow streets and create better conditions for non-motorised traffic, while increasing pedestrian safety.

The photo is illustrative

"Transit traffic will be diverted to trunk roads from Kalamaja, a two-way cycle path will be created on Rannamäe tee, and public transport will be made faster. Kalaranna street will become the main road, as it has sufficient capacity and is the fastest route between Põhja-Tallinn and the city centre," explained Deputy Mayor Andrei Novikov. "In order to make the traffic flow from Kalaranna street smoother, the green light time for vehicles coming from Kalasadama street will be extended and the Suure Rannavärava intersection will become an unregulated intersection. On Rannamäe tee, which has been narrow until now, there will be additional space for cyclists - a two-way cycle lane will be created. The new cycle lane will be the last section of the Old Town cycle circuit to create a safe cycle route around the Old Town."

According to Andrei Novikov, the change in traffic management will improve the speed of public transport and is likely to increase the number of people using public transport. "As transit traffic will be diverted elsewhere from the narrow Kalamaja streets, the speed of bus line No 3 is also expected to improve," he said. However, as the new traffic scheme does not allow for a left turn from Suurtüki street to Rannamäe tee, the bus will run from the other side of the Old Town, along Toompuiestee and Kaarli puiestee. This will also create a direct connection between the Baltic Station and Freedom Square, which has been long anticipated by many residents," added Novikov.

It should also be noted that the section of Põhja puiestee next to the Põhja Rimi supermarket, between Niine and Soo streets, will become two-way. It will no longer be possible to make left turns from Suurtüki street to Rannamäe tee and from Rannamäe tee to Mere and Põhja puiestee.

On Toompuiestee, one-way cycle lanes of standard width in both directions will be drawn and the number of motor vehicle lanes will change.

"An important objective of the new Toompuiestee solution is to ensure the safety and security of cyclists and pedestrians. By designating cycle lanes and separating them from the rest of the roadway, cyclists and scooter drivers can be separated from the pavement, which will benefit both cyclists and pedestrians," said Novikov, adding that the redesign will inevitably bring changes to the existing street space. "At the crossing in front of the Kaarli Dental Clinic, there is currently tight space for all road users, and at the bus stops, cyclists and bus drivers have to interact amicably - creating eye contact and understanding who gives way to whom. In the future, we will be reconstructing the street and designing these areas to be more accessible for all road users."

A 2+1 concept will be applied to the motor vehicle lanes. The main subject to this will be Paldiski maantee, with two lanes going towards the Baltic Station and two lanes going towards Kaarli puiestee. In the opposite direction there will be one lane, except at some intersections (e.g. Tehnika intersection). The speed limit for motor vehicles will be reduced to 40 km/h. A study has established that this will not increase congestion, but that lower speeds will ensure smoother traffic flow and also reduce fuel consumption, air pollution and noise.

In front of the Go Hotel Schnelli (Toompuiestee 37/1), the on-street parking spaces for buses will be removed and the space will be redesigned as a cycle lane lined with bollards. However, the turning lane in front of the hotel will be wider. At the Von Stackelberg Hotel (Toompuiestee 23), parking and stopping on the main streets is not possible now or in the future. However, the new solution will leave the hotel's pavement space exclusively for pedestrians. In front of the L'Ermitage Hotel (Toompuiestee 19), stopping is still forbidden, but the cycle lane will be separated by bollards.

Changes to traffic management in Toompuiestee: diagrams 5 and 6

Today, 6 July, the removal of the old road markings on Toompuiestee and Rannamäe tee will start. On the evening of Monday, 11 July, the drawing of the preliminary markings is scheduled to start and, weather permitting, the permanent markings will then be drawn. 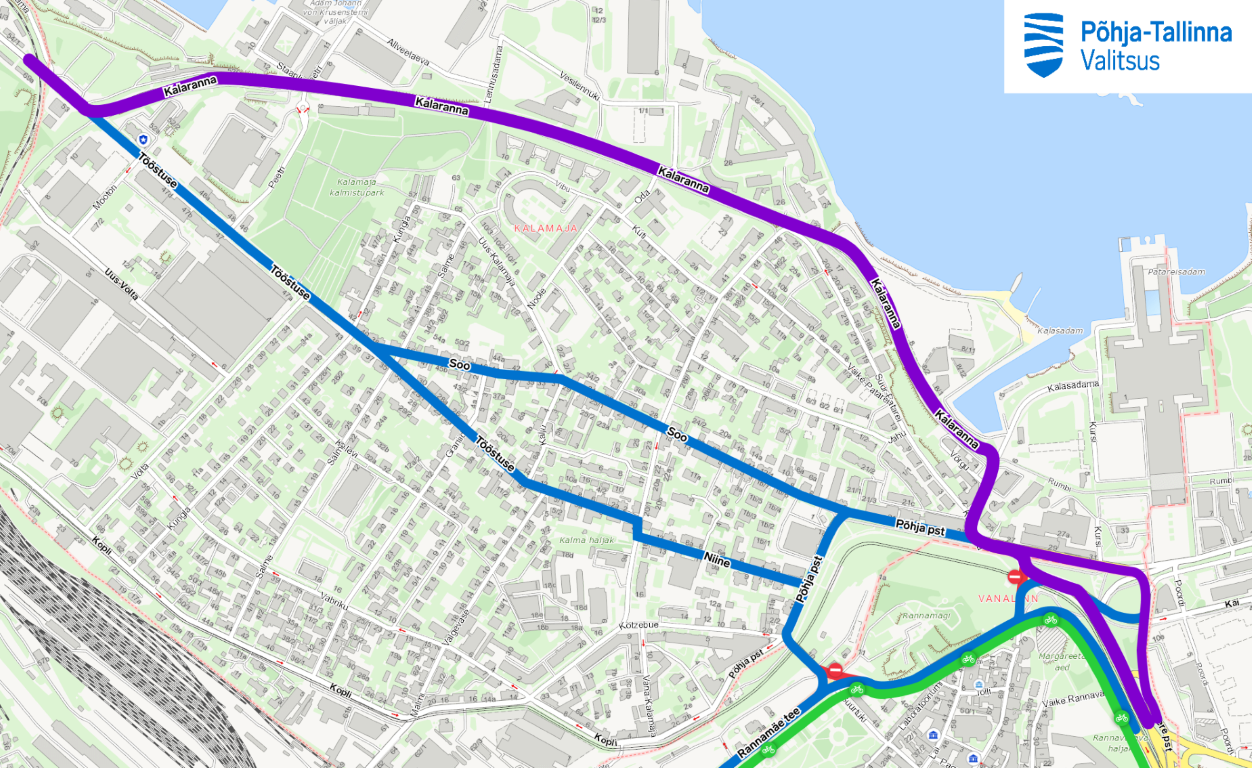 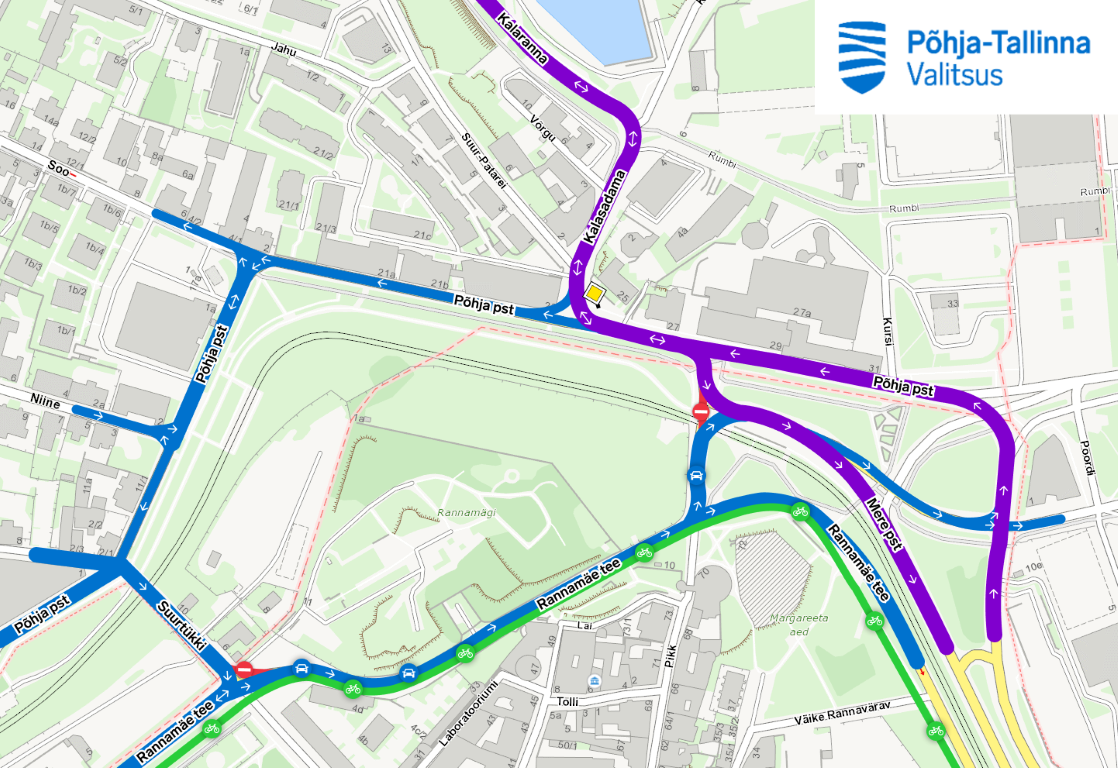 Diagram 3: Kalaranna street will become main road, coming from Tööstuse street you need to give way 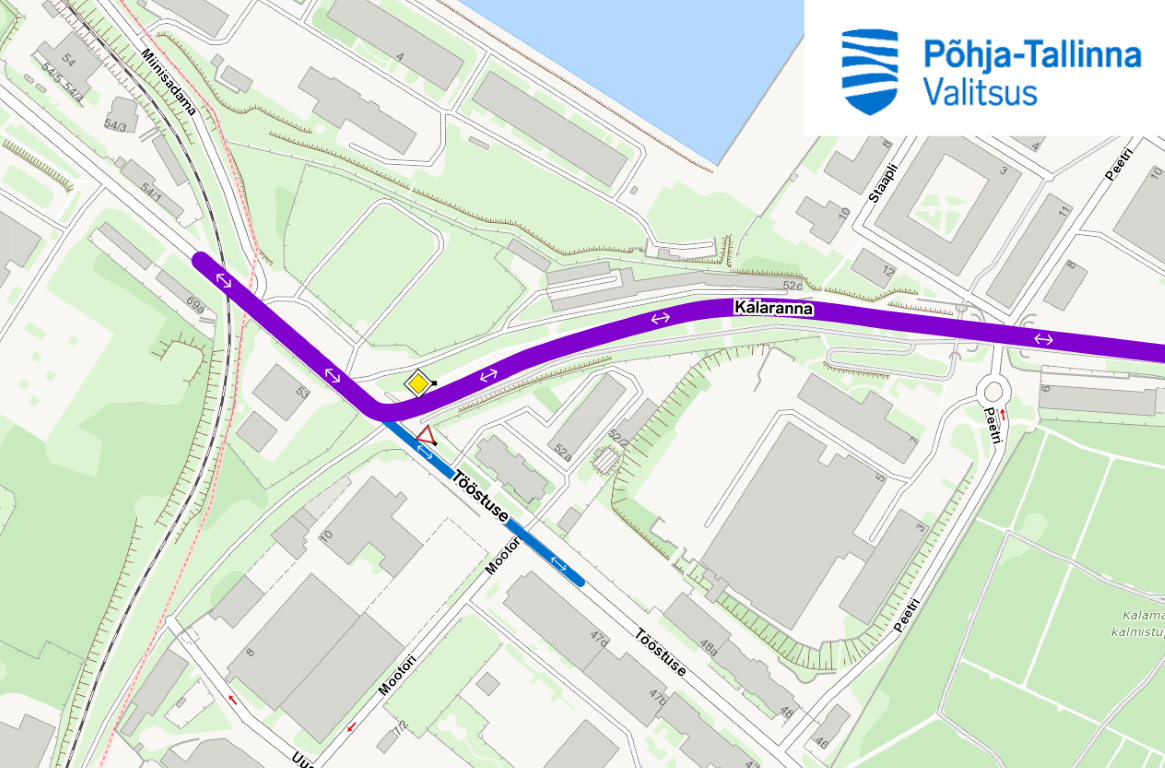 Diagram 4: changes to bus line No 3 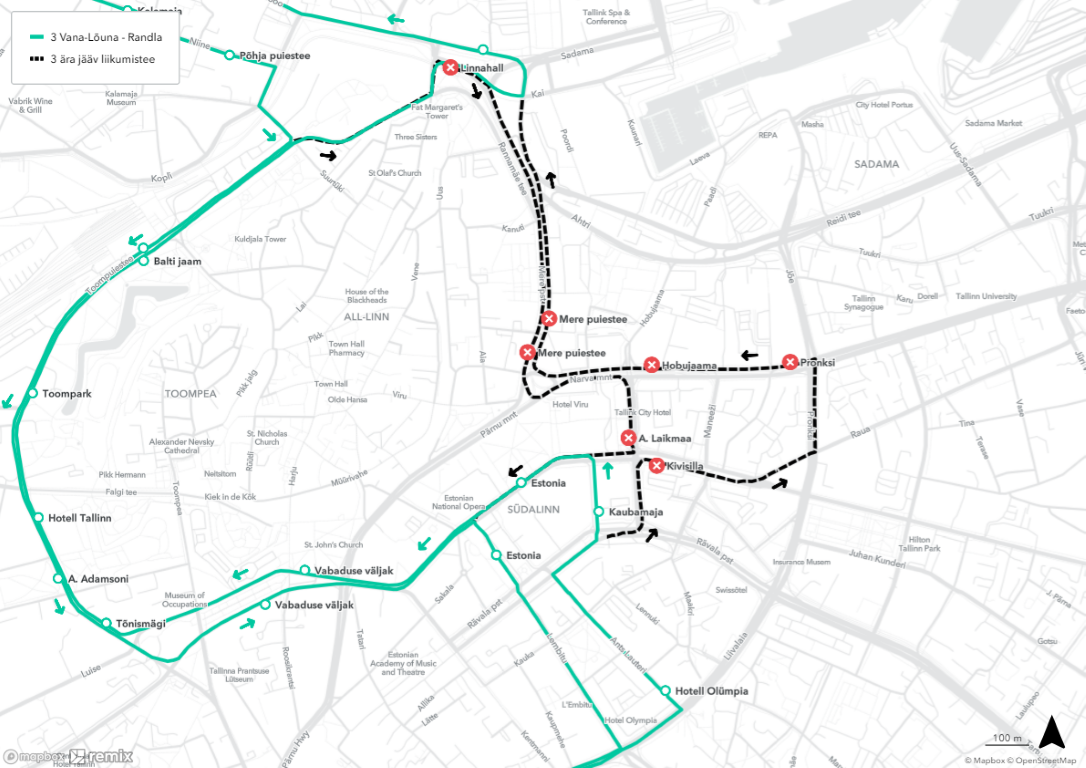 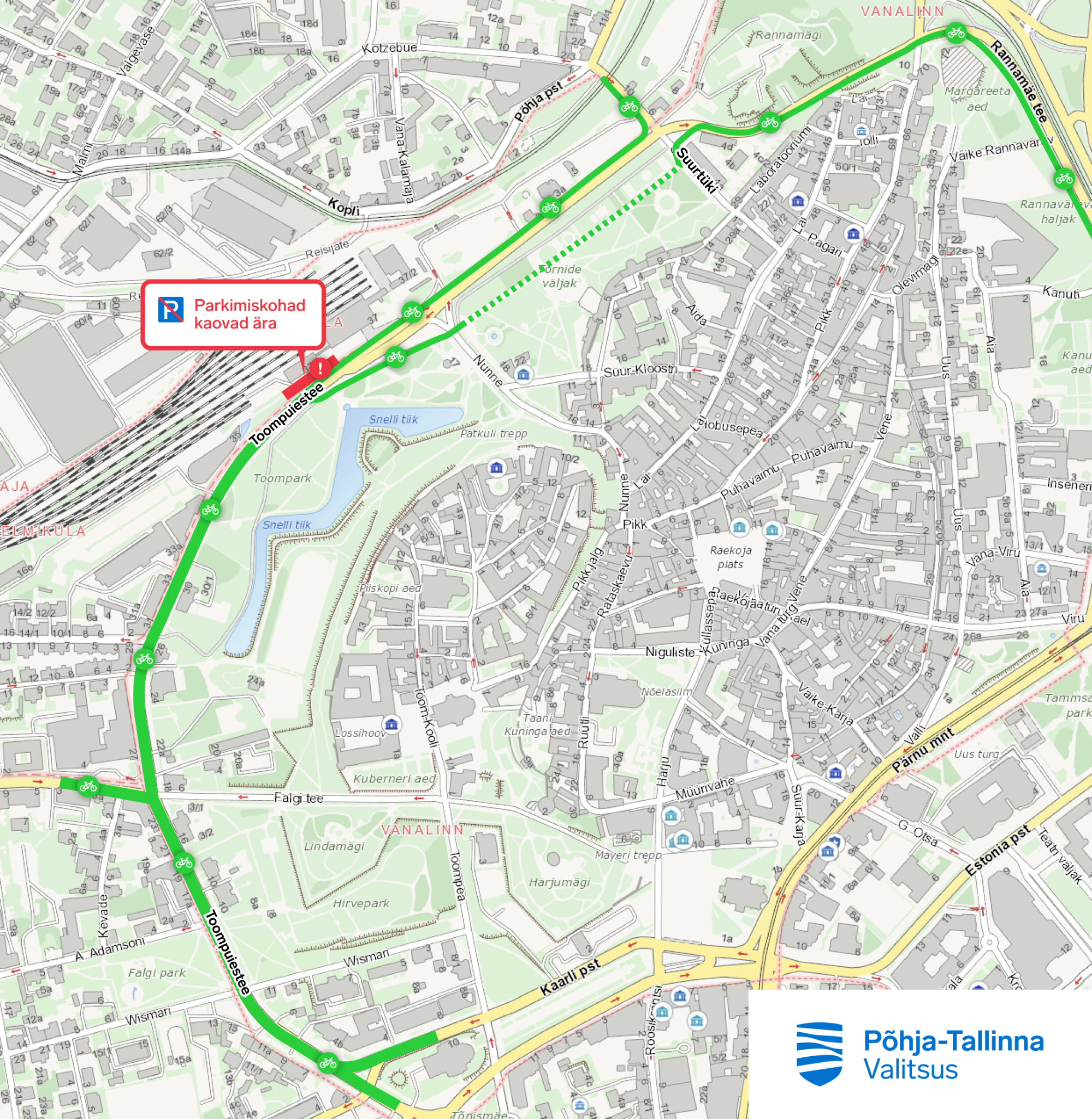 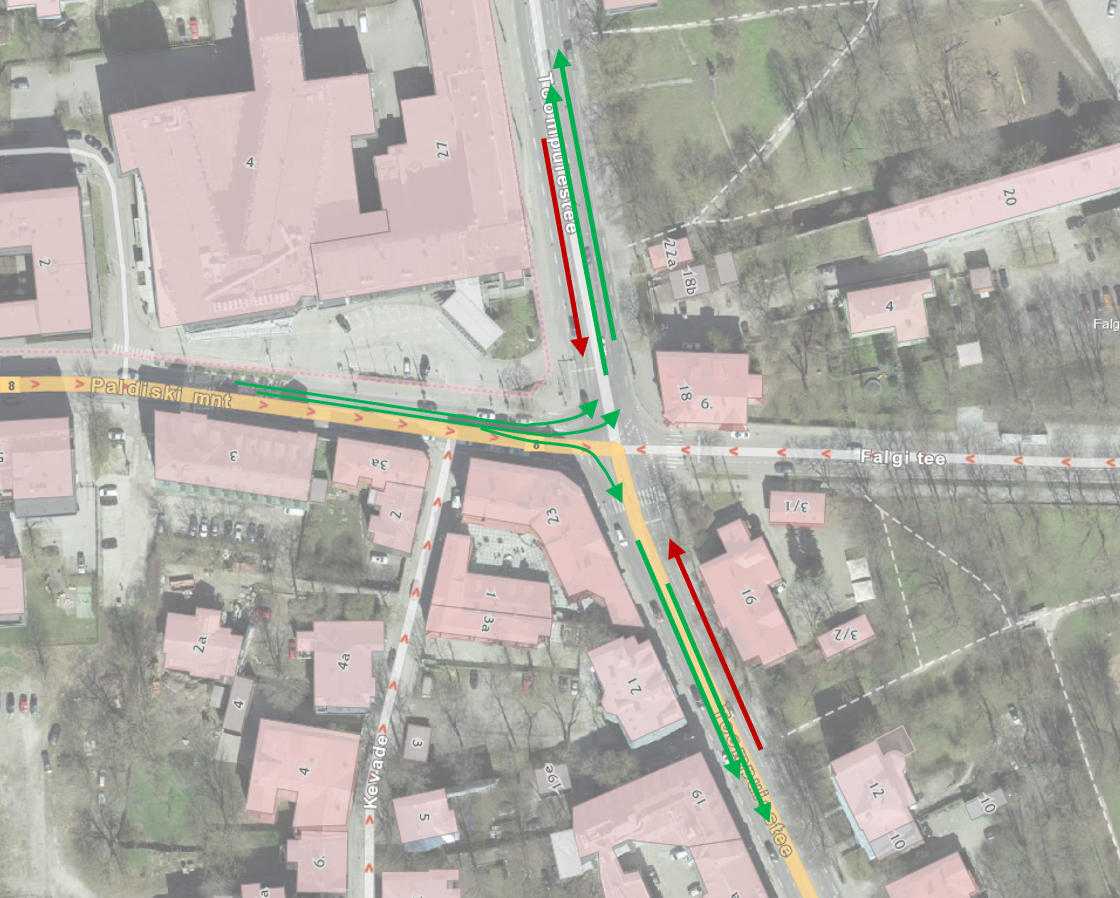