Tallinn Mayor Mihhail Kõlvart confirmed at today's press conference that the city plans to finalise the design of the Tallinn Hospital and will start looking for alternative sources of funding. 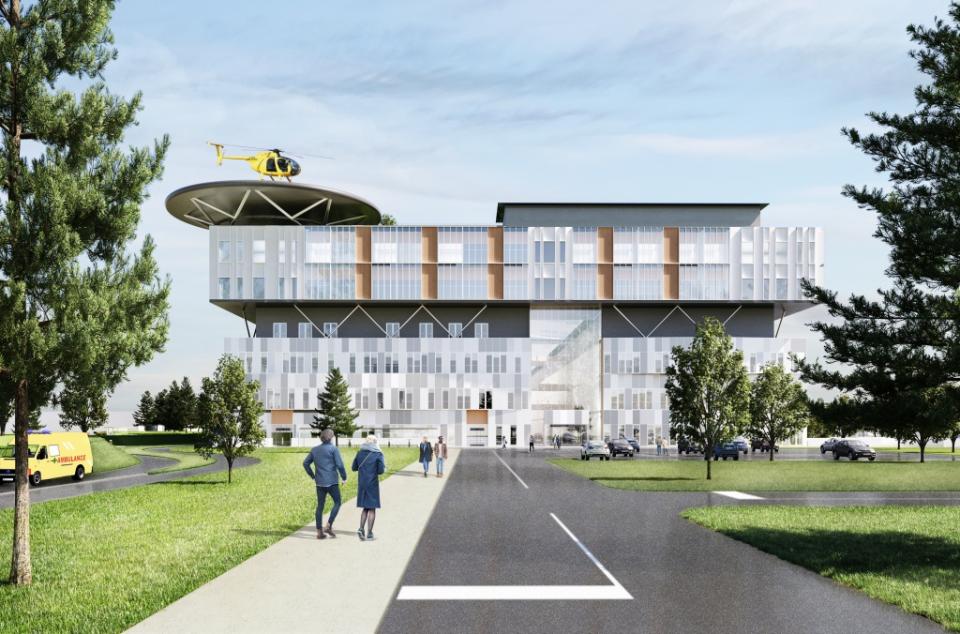 According to Kõlvart, the construction of Tallinn Hospital is not just a question of money or medical services, but a project of strategic and existential importance. "Therefore, we have decided to proceed with the design, so that if funding is found, construction can start without delay. We will probably not carry out the initial plan to start the construction of the hospital's basement by the end of this year, but we will continue with the design work at the planned pace," said the mayor.

In November 2021, following a public procurement procedure, the city signed the design contract with the international company ATIproject srl ja 3TI Progetti Italia-Ingegneria integrata S.p.A.. The value of the contract is €17.8 million plus VAT. The preliminary project is due for completion in November 2022.

The mayor said that the need for a modern medical campus has not gone away, as the East and West Central Hospitals will no longer be able to provide services in their current buildings in the next seven to eight years. "There are no hospitals in Estonia where the necessary conditions are guaranteed to cope with both epidemics and war situations. When the government accused the city of initiating the construction of a second underground floor as one of the issues, this is not a whim of the city, but a real need based on thorough analysis," Kõlvart said. "All of the critical arguments were already known in 2021, when the European Commission decided that the Tallinn Hospital project was suitable and would receive funding. Hundreds of specialists, including doctors and architects, have been involved in the preparation of the hospital's design and construction for several years."

"Yesterday's decision by the government on such a major public project calls into question the administrative culture of our country, and we as a state contractor also heard the news through the media. Providing a health system is a national responsibility. The government's decision only raises questions and costs," Kõlvart said. "The allegations on the basis of which the government decided not to fund the hospital are not substantiated and do not correspond to the truth. The necessary work has been done by Tallinn in a proper and timely manner, and the proposals and the principles for the allocation of funds have been submitted to the ministry. The city has a contract with the Ministry of Social Affairs for the development of the hospital, and at the moment we are proceeding on the basis that legally we have a binding relationship with the contracting partner," Kõlvart said.

According to the mayor, as a matter of administrative continuity, the city expects compensation from the state for the hospital's design work. "We will start discussing this with the state in the near future. If there is no common understanding during the negotiations, we will settle it through the courts," Kõlvart added.

Sven Kruup, chairman of the board of Tallinn Hospital Development Foundation, pointed out that the project team started preparing Tallinn Hospital in 2017. "Already in 2019, the functional development plan of the hospital was completed, the first stage of which outlined the list of specialties to be practiced in the new hospital, so the claim of duplication with other hospitals is erroneous. The second phase development plan outlines the hospital's space programme, functionalities, units, and was the basis for the preliminary design. The documents of the first and second stage of the hospital’s functional development have been approved by the Ministry of Social Affairs, and this is the basis for the design," Kruup explained.

"A preliminary project for the hospital's medical technology has also been completed, including a list of the hospital's medical equipment, a description of the workstations and a preliminary estimate of the cost of medical technology. In 2019, the Ministry of Social Affairs and the city agreed to cooperate in the development of Tallinn Hospital, and the city has also signed an external financing agreement with the Ministry of Social Affairs. The design tender has been carried out and the design contract has been signed, with the design work currently ongoing in cooperation with local experts. All formalities have been carried out correctly and all preconditions met, in line with best practice. We are on schedule with the preparatory work and have met the first deadline," added Sven Kruup.

According to Tarmo Bakler, Chairman of the Management Board of East-Tallinn Central Hospital (ITK), the two central hospitals of Tallin are state-of-the-art in terms of staff and technology, but the hospital buildings are dated from 50 to 100 years. "The most technologically demanding units, such as the operating theatres, meet all the requirements, but in many of the rooms we cannot guarantee the necessary temperature, for example in the current weather. Providing cooling in blocks for intensive care patients is very difficult in today's weather conditions. Tallinn's hospitals as a whole will need a systemic solution in the next ten years," said Bakler.

The chairman of the ITK board pointed out that nearly 200 specialists from the two hospitals have contributed to the project preparation in dozens of working groups with the design team and architects. "Even yesterday, we had already been working for several hours with the design team when the signal came from the government to pull the funding for Tallinn Hospital. Tallinn Hospital is not being built to find an application for €280 million, it is being built because there is a real need for it," said Bakler.