Head of Tallinn Education Department to resign on 8 July

By order of the City Government, Andres Pajula, head of Tallinn Education Department, will be relieved of his duties on 8 July 2022. 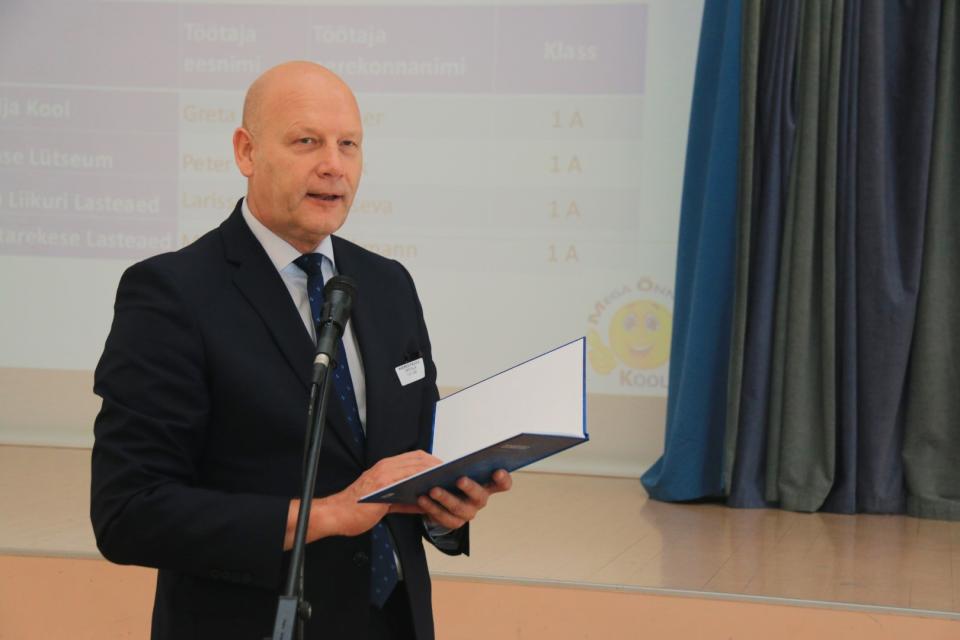 Andres Pajula has worked as the head of the Education Department since 17 March 2003, and has been in charge of Estonia's largest education network of around 200 institutions for more than 19 years. During this time, the education landscape of Tallinn has undergone many major changes and development leaps, while the crises caused by the COVID pandemic and the war in Ukraine have also demanded his strength and commitment.

"Andres Pajula's work has been guided by the mission to create the best possible learning environment in Tallinn's educational institutions, which would support the quality of education to reach the best in the world. This goal has now been achieved - we have the best education in the world, as proven by the PISA tests on several occasions. While 15 years ago our education officials were visiting Finland to learn from its cutting-edge education system, now dozens of delegations of educators from all over the world visit Tallinn every year," said Tallinn Deputy Mayor Vadim Belobrovtsev.  "Excellence is the result of joint efforts and teamwork, but the role of leadership cannot be underestimated. On behalf of the City Government, I acknowledge Andres Pajula for his long service and great contribution to the development of the city's education system and wish him success in his future endeavours."

To date, more than 90 percent of Tallinn's municipal schools have been modernised, including 48 buildings that have been renovated or built during Andres Pajula's tenure. In recent years, for example, the Tondi School, the Tallinn German Gymnasium, the extension of the Merivälja School, the sports hall of the French Lyceum, the sports hall of the Nõmme Upper Secondary School and many others have been renovated or built. In 2007, the PPP model was implemented for the first time, which at the time allowed for the rapid renovation of many out-dated school buildings and was a novelty in the education system. The ventilation systems of many schools have been upgraded, which is particularly important in the context of the pandemic. A modern ICT environment has been set up in schools, which allowed to cope with distance learning during the COVID crisis. The reorganisation of the school network has led to the closure of 20 schools and the expansion of 7 schools, e.g. Kadriorg German Gymnasium (Mäe building), Gustav Adolf Gymnasium (Kotzebue building), etc. Two new hobby schools have been built: Tondiraba Hobby School and Lasnamäe Music School.

Under Andres Pajula's leadership, the Education Department has worked consistently on development programmes for headmasters of educational institutions. Among other things, a system of performance evaluation of headmasters has been set up, which has been a model for the whole country. A mentoring programme was set up in 2006 to support aspiring principals and is still in place today. In cooperation with the charity foundation Heateo Haridusfond, a traineeship programme for Tallinn's educational leaders in private companies was launched, which was considered worthy of nomination in the national acknowledgement contest "Eestimaa õpib ja tänab 2021".

Teachers' salaries have been increased every year for more than ten years, and kindergarten teachers' salaries have been levelled to school teachers. As the head of the Education Department, Pajula has made a point of recognising good work and rewarding people for their efforts. Numerous competitions have been launched to recognise teachers, which have become increasingly popular, with around 800 teachers now entering the competition each year, having started with a dozen candidates.

There are also competitions for pupils – around forty different competitions are organised each year, as well as subject and sports competitions, with around 10,000 pupils taking part. Among the student events, one of the most memorable is the traditional party for pupils in the first grades, held every year on 1 September in Freedom Square. The "iduEDU" festival of modern learning has brought together learners of all ages and has also been recognised in a national acknowledgement contest (2020). In partnership with Tallinn's primary education and school leaders' associations, Pajula was the lead organiser of the charity programme "Märka ja aita" (Notice and Help), which has enabled support for children and students in difficult economic circumstances.

Andres Pajula has been awarded the Tallinn Order of Merit by the Tallinn City Government in 2018, the Knight of Humanitarian Pedagogy in 2014 and the Tallinn Education Mission Award in 2020. In 2012, he was recognised by the Harju County Local Authorities Association as deserving of the "Väike HOLMER" award.