The Rescue Board, in cooperation with the Environmental Board and the Põhja-Tallinn District Government, is cleaning up the pollution of old heavy fuel oil discovered in the central part of Stroomi beach. Until the beach is inspected and cleaned up, swimming on Stroomi beach is strictly not recommended. Going into the water is at swimmers’ own risk. 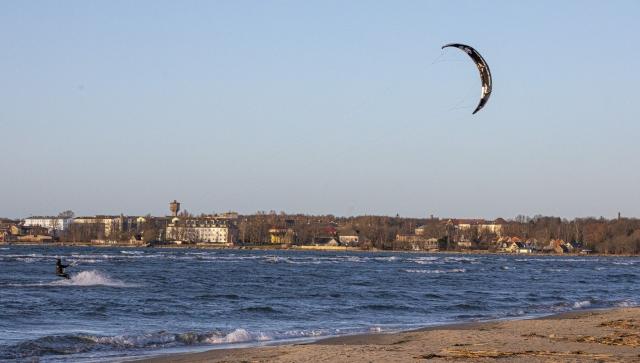 The pollution has been discovered in shallow waters on the beach, in an area of about 300 square metres, and is located under the sand, where it has started to seep out for reason unknown. Manual excavation has revealed pollution from up to a metre deep. More detailed monitoring of the pollution and inspection of the shoreline began today, 6 July.

The initial polluted area was sealed off with the help of coastguards already on 28 June, and samples of the pollution were immediately taken to lab studies by the Environmental Board. At the same time, the Rescue Board started to collect the pollution by hand, with over 40 bags of heavy oil products collected so far. It has now become clear that heavy equipment will be needed to dig up the contaminated soil and dispose of it.

Himot Maran, Adviser to the Environmental Board, explained that the oil product must be collected from the environment as soon as possible. "However, it is not a crisis situation at the moment, as the spill is bound to the sand, stays put and does not spread. There is therefore no major threat to the marine environment and marine life at the moment," said Maran.

The source of the leak is currently unknown, but the depth and behaviour of the spill suggest that it is more likely to be an older heavy fuel oil residue that has now reached the surface due to sand layer displacement. The extent of the contaminated soil will become clearer during the rescue work.

To ensure public safety, the swimming area of the Stroomi beach is closed for the duration of the excavation. According to Manuela Pihlap, Põhja-Tallinn District Elder, restricting swimming at the beach was a difficult but unavoidable decision. "It is our task to act swiftly in this situation so that the cleared beach can be reopened as soon as possible. We will find partners to work with us as a matter of urgency to remove the residues of the pollution from the water so that the polluted area does not expand. It is important that the complex work can be carried out with as little damage to the environment as possible, and that the contaminated soil is safely disposed of," explained Pihlap.

The clean-up is being organised by the Põhja-Tallinn District Government, which will keep residents informed about the progress of the work. The Environmental Board will also continue its inspection missions until the extent of the pollution has been finally determined and cleared out.

The nearest alternative swimming spot to Stroomi beach is the Blue Flag beach of Pikakari.