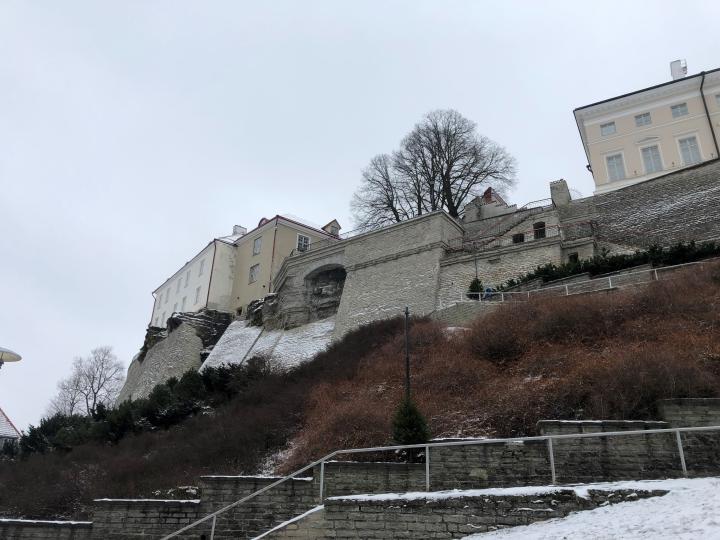 According to Deputy Mayor Madle Lippus, it is important for the city to preserve its historic urban space. "Toompea's retaining wall is an important urban layer, and its restoration will better highlight and support the preservation of the Old Town's originality," said Lippus. "Next year, the city plans to continue with the restoration of the retaining wall and to restore the Patkuli staircase and the Kohtuotsa viewing platform."

The city started the restoration of the retaining walls covering the natural limestone slopes of Toompea in 2017. Today, most of the walls on Toompark and Nunne Streets have been restored. This year, the retaining wall between the Patkuli stairs and the Kitseaia park and at the Kohtuotsa viewing platform was repaired.

The restoration work cost a total of around €290 000. Vegetation, trees and bushes were removed from the walls, the walls were cleaned, decayed parts of the walls were repaired and jointing was carried out.
According to City District Governor Monika Haukanõmm, nature was increasingly encroaching on Toompea's retaining wall, and renovations were essential. "The last time the Toompea wall was maintained and restored was some twenty years ago, and so you could already see bushes and larger trees growing on the retaining wall. The greenery in the urban space is welcome, but unfortunately the roots of the trees started to crack the retaining wall more and more and it was already in danger of collapsing," said Haukanõmm. "Now, the 19th-century building heritage has been cleaned up and is visible, safe and well-kept for visitors- as befits a UNESCO World Heritage city."
The Toompea wall, in the section bordering the present Toompark, was preserved as a natural cliff until the second half of the 19th century. As the cliff edge was occasionally subject to landslides, which also threatened the buildings based on the wall, the desire to build a retaining wall arose at the turn of the 18th and 19th centuries. However, the construction of a retaining wall on the current Toompark side did not begin before the end of the 19th century. The fortification of Toompea's wall was begun a little earlier, on the cliff above the Pikajala Street and along Nunne Street.

The retaining wall on the Toompark side was built in stages from the 1870s until the early 20th century. The large arches built into it took on the pointed-arched neo-Gothic shape characteristic of the period. In 1903, the Patkuli staircase was built at the top against the vertical slope of the Toompea wall. A serpentine ramp was built at the bottom.

The first major renovation of the retaining walls took place in the second half of the 1950s. Among other things, a connecting staircase was designed and rebuilt next to the Pilsticker Tower. At the same time, the Patkuli staircase was extended downwards. The last part of the Patkuli stairs was completed in the 1970s. Thereafter, the retaining wall was left unmaintained for decades and the footpaths at its foot became overgrown.

Major renovations took place between 1993 and 1999, after which the retaining wall was again left without permanent maintenance until 2017.

Tallinn's Old Town, with its historically complex structure, has been a UNESCO World Heritage Site since 1997. The city's long-term strategy "Tallinn 2035" aims to ensure that Tallinn's protected sanctuaries, towered city wall and fortifications are restored and accessible to the public. Tallinn also promotes academic research on heritage.