From 15 to 17 September, thousands of lights will be lit in Kadriorg Park, Pae Park, Tallinn Old Town and Männi Park, inviting residents and visitors to take an illuminated walk. The theme of this year's outdoor light festival 'Valgus Kõnnib' (Wandering Lights Festival) is "Stories of the night". 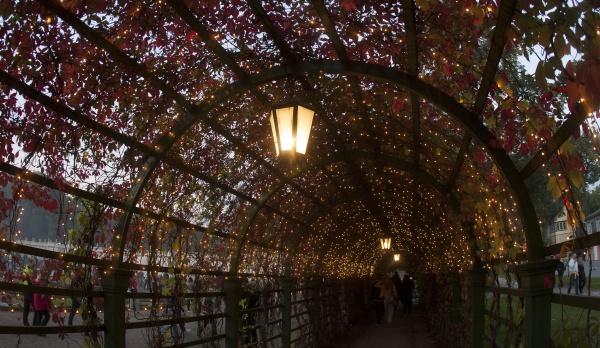 According to Tallinn Deputy Mayor Vladimir Svet, the annual free festival brings thousands of lights and large scale installations to Tallinn. “The festival, which traditionally started in Kadriorg, has over the years become a popular event and has therefore been expanded to other parts of Tallinn to provide people with positive emotions. Culture in general, and literature in particular, enlighten us and carry us forward, being beacons in our lives. That is why this year's festival will not only show the way in the dark, but also tell stories,” said Svet. “We invite all Tallinners and guests to end the summer season in the parks and let the positive emotions of the light festival carry them through the darker seasons."

In addition to Kadriorg Park, the Wandering Lights Festival will also take place in the Tallinn Old Town, Pae Park in Lansamäe and Männi Park in Mustamäe. In cooperation with the Estonian Writers' Union, video projections will be created for the Writers House on Harju Street. The festival will start on Thursday evening, 15 September, in Pae Park, with a poetry reading programme with a light and video show at 20:00. The route from Pae Park to Kadriorg Park will be illuminated, and guests can enter Kadriorg's world of light via the Katariina Staircase.
The opening ceremony of the light festival will take place at the Swan Lake in Kadriorg on 15 September at 20.30, followed by a show of musical fountains and UV drums.

The Wandering Lights Festival will take place in Kadriorg Park from 15 to 16 September, starting at 20.30. In the Old Town, there will be a performance by fire artist on 16 September at 20:00 by the towers of the Viru Gate, a video projection "The Seasons" on the towers of the Viru Gate from 20:15 to 23:00, fire performance in the green area of Harju Street at 21:00 and a playful spectacle "The Great Painting" in front of the Sõpruse cinema at 21:30. This year, the Estonian Writers' Union is celebrating its 100th anniversary. To mark the occasion, on Friday, 16 September at 20.30-23.00, a video projection will be shown at the Writers House, illustrating the works of five writers who have lived there. On Saturday 17 September from 20.15 to 23.00, the video projection "The Seasons" will be shown on the Viru Towers in the Old Town.

For the first time in Mustamäe, in Männi Park, the festival programme will start on 17 September at 20.20 with a performance of "The Story of Mustamäe - A Reflection Machine", followed by performances by fire artists and a light installation in the park.

Due to the limited number of parking spaces at the festival venues, visitors are advised to arrive on foot, by bicycle or public transport.

For more information and the programme of the Wandering Lights Festival 2022, visit http://www.kadriorupark.ee/park.