The memorial stone, which was located in the car park near the intersection of Valdeku tänav and Viljandi maantee in Tallinn, was today relocated to the Liiva cemetery. 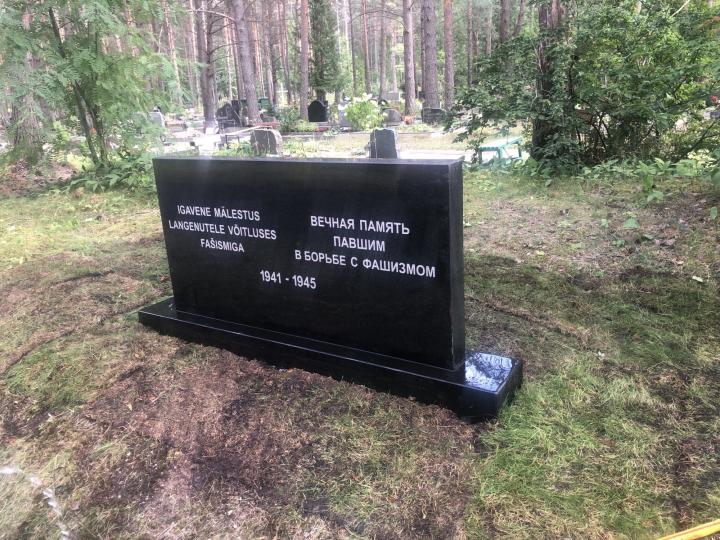 The new location of the memorial is in the Liiva cemetery’s alleyway that leads to the Holocaust memorial, and nearby is the monument marking the burial site of 164 Soviet prisoners of war.

"I was approached by representatives of the Association of War Veterans who fought on the Soviet side in the Second World War to relocate the war memorial on Viljandi maantee to the nearby Liiva cemetery. We complied to this request," said Ain Järve, Head of Kadriorg Park, who also manages the cemeteries in Tallinn.

The memorial is a black granite monument with the inscription "In eternal memory of the fallen in the struggle against fascism. 1941-1945" in Estonian and Russian. No other elements or symbols are depicted on the monument. There is no mention of the memorial in the documents of the Tallinn authorities or in the National Register of Buildings, nor is it protected as a heritage site. There are no known burials under or in the immediate vicinity of the monument.

"Considering the tensions in society, it is entirely justified to erect a memorial to the war casualties in a cemetery where the deceased can be commemorated with dignity. The Liiva cemetery is a suitable location for this monument, as it is geographically very close to the former location and there are already several memorials here that also commemorate those who died during the Second World War," Järve added.