To commemorate the 700th anniversary of the first mentioning of Tallinn Town Hall, Omniva has issued a postage stamp, which will be presented on Thursday, 4 July at 12 noon at the Town Hall. 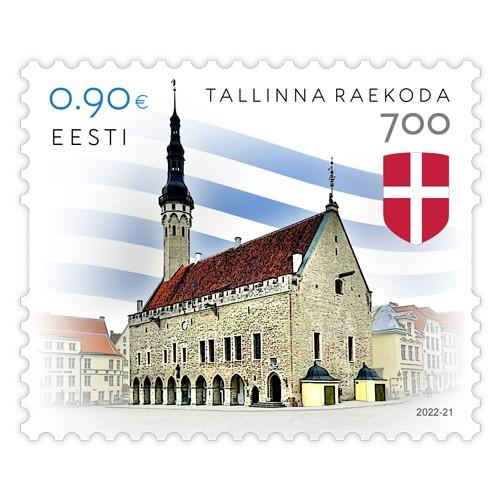 The stamp was designed by Indrek Ilves and produced by printing house Vaba Maa. The postage stamp and the first day cover are on sale at the release event at Tallinn Town Hall, in Omniva's e-shop and in post offices across Estonia. The first day imprint is available at Toompea post office, Lossi plats 4, Tallinn.

According to Tallinn Mayor Mihhail Kõlvart, the dedication of the postage stamp to the 700th anniversary of the first marking of Tallinn Town Hall is a beautiful gesture to the dignified building. "The Town Hall Square with the Town Hall encapsulates a very large part of Tallinn's history and it is certainly one of the proudest places in Tallinn. Dedicating a stamp to the anniversary of the first mentioning brings history closer to us, but also creates more of it," said the Mayor.

Tallinn Town Hall, one of the oldest in Europe, first appeared in written records 700 years ago. In medieval Europe, the town hall was a symbol of urban self-government and the embodiment of civic spirit. The medieval city was marked by the town charter, by which the lord of the manor gave the community of merchants the right to choose a town council from among themselves and to govern the city themselves. As a symbol of this, the town council erected a town hall on the market square, the town's most important site. For the citizens of Tallinn, the King of Denmark granted the town charter of Lübeck in the mid-13th century, linking us to the European legal and cultural area. The Town Hall is a real testimony to this, a symbol of European urban culture.

The first written record of Tallinn Town Hall was found in the town council's property book. In 1322, it is referred to as consistorium, a 'meeting place' in Latin, meaning the location of a stone cabin 'below the town hall'. In the days when street names did not exist, the location of buildings was determined by known objects, including the town hall. The town hall mentioned at that time is part of the first floor and basement of the present town hall, which was extended in several stages in the 14th century. A new main floor, arch and tower were added in the early 15th century, and it is in this form that the Tallinn Town Hall is standing today.

Under the magnificent Gothic arches of Tallinn Town Hall, rare works of art have been preserved, ranging from medieval town councillors' benches to Baroque paintings and woodcarvings. Taken together, it forms a rarely preserved ideological and artistic whole, expressing the town council's notion of wise governance and fair justice.